DIRECTORATE OF ADMISSIONS
Mehran University of Engineering and Technology, Jamshoro 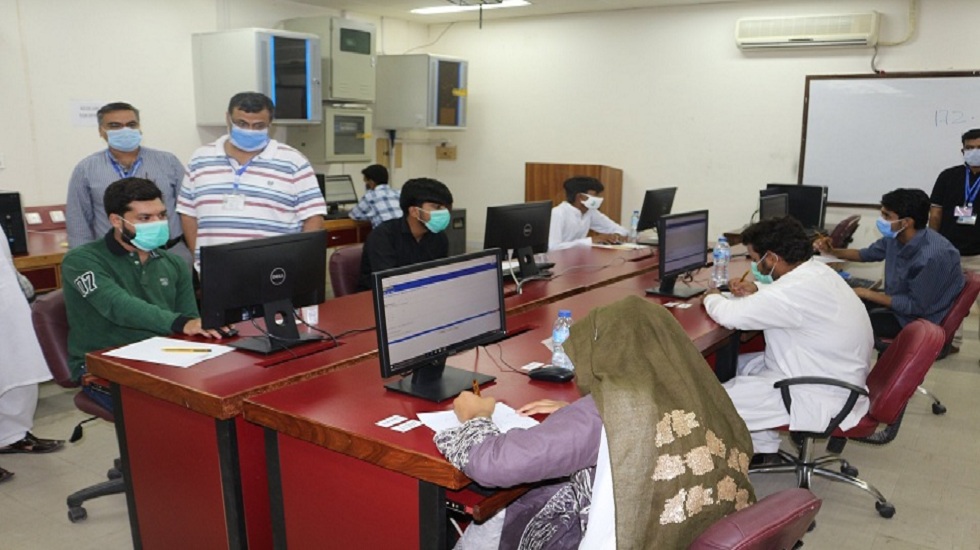 (i)
Admissions to the First Year for all the degree courses are made according to the policies and rules, framed by the authorities of the University from time to time. The rules mentioned in this prospectus are subject to revision by the competent authority as and when deemed necessary and without notice. There are other categories of candidates who are also eligible for admission, which are described in detail in the subsequent sections
(ii)
The candidates who have been allowed admission previously with any batch by this University shall not be considered for fresh admission. Their admission forms, if received by the University shall be rejected without any notice. However, if any admitted student desires to seek admission in any discipline under Self Financing Scheme, or University Support Program, he/she may apply for the same and submit an undertaking on the stamp paper to the effect that he/she will not claim admission under Regular Scheme of the year. Similarly, if the admitted student under Self Financing Scheme, or USP, if apply for admission under Regular Scheme, he/she may apply for the same for which he/she will be required to submit an undertaking on the stamp paper to the effect that if he/she is admitted in the desired discipline he/she will not claim the refund of the money whatsoever, he/she has paid with the previous batch.
(iii)
The candidates who apply for their admission on the basis of fake certificates/documents (detected before or after their admission) shall be prosecuted under criminal law and their admission shall be cancelled. Additionally, they may also be debarred for a period of three years for future admissions and all payments made to the University shall be forfeited in favour of the University.

In addition, the candidates who have passed their HSC Part-II Annual Examination of 2022 under General Science Group or equivalent and have passed their HSC Part-II Annual Examination earlier up to 2019 under General Science Group and have secured at least 60% marks (Grace marks shall not be considered) are also eligible to apply for admission only in Computer Systems Engineering, Software Engineering, Electronic Engineering and Telecommunication Engineering and they will not claim their admission in any other discipline.

In accordance with the policies adopted by the Federal as well as Provincial Government of Sindh all the eligible candidates applying under any category are now required to appear in the Pre-admission Test organized by the University.

Candidates having secured less than 40% marks (with no negative marking) in the Pre-admission Test shall not be eligible for the admission in this University.

The final merit list of the candidates for each district/category will be prepared by calculating the overall merit, based on the marks obtained in each of the following examinations, multiplying them with the respective weightage and adding the result to calculate the “Composite Percentage Number” (CPN*) as described below:

For example, if a candidate has secured 70% marks in SSC,60% marks in HSC and 50% marks in pre-admission test; his/her CPN would be given by:

*Adjusted marks means marks secured in HSC examination plus additional marks if any, as defined in Additional Marks , minus marks to be deducted as defined in Deduction of Marks .

Note:
All nominees local/foreigners should submit the result of SAT, UET’s, NUST or officially approved National/International Organization or other International level Test they have passed for their admission purpose or appear in the Pre-admission Test of this University and clear the same. In case they do not clear the test they will not be considered for admission at this University.

After the receipt of the results of Pre-admission Test, a comprehensive merit list will be prepared for each district/category and a number of candidates roughly equivalent to the reserved seats of concerned category will be called for interview before the Admission Committee. The candidate must accompany with his/her guardian declared in his/her admission form during interview. The interviews will be held at Mehran University, Jamshoro on the dates as announced in the newspapers and also on Website www.muet.edu.pk

The candidates will also be required to bring their original certificates for verification, particularly the following seven certificates.

Without above documents/short of any document, the candidate shall not be allowed to appear in the interview and will not be considered for admission. The admission in discipline/technology shall be allocated on the day of interview. If admitted the above original documents would be retainted by the University for atleast one entire year.

It is mandatory for the candidates to appear before the Admission Committee for interview. If any candidate fails to produce all or any of the above-mentioned documents, he / she shall not be allowed to appear in the interview and will be disqualified from the process of admission.

The admission in any of the disciplines shall be allowed on the day of interview; and if admitted, all the above original documents would be retained by the University for at least one entire year. The candidates are advised to keep a photocopy of all the documents with them. The candidate has to deposit the fees as mentioned in Fee Structure at the time of interview.

The candidates may give their choice to study at UET, Lahore, UET, Taxila or UET, Peshawar under reciprocal seats at the time of interview. The candidates with high CPN will be awarded the seat on merit. There following seats:

From this year the award of discipline/technology shall be made on the day of interview. The candidate has to opt technology/discipline from their own respective district/category. However, if the candidate has applied in more than one category he has to select/decide on any one of them on the day of interview, on the category, if they are not interested in any of them, they have to withdraw from admission in writing and his/her name shall be deleted from the list(s).The candidates shall have to pay the admission fees on the same day and obtain roll number accordingly.
The candidates who are selected but do not get the discipline of their choice they may give up to 5 choices of their desired disciplines/technologies. They will be considered on merit, in accordance with the order of their choices, for their desired discipline/technology if later on it becomes available.
The candidates who after selection cancel their given choices by exercising their retaining / freezing option of the system (freeze their selected discipline) but later on withdraw from their admission for any reason, they will not be entitled for refund of their paid fees.

The Admission Merit Lists / Call Lists announced by the University are provisional and if any mistake is detected, it is rectified accordingly.

Admission of candidates who fail to deposit the admission fees on the interview day.

If any candidate fails to deposit admission fees on the day of interview, his/her seat is allotted to another candidate in merit.

The candidates, who have a certificate of Hafiz-e-Quran on printed form from a registered Maderasah and clear the test of Hifz taken by the University, will also be considered for additional 20 marks to be added in the marks of HSC Part-II.

Deduction of Marks due to gap in Education

In case of a gap or repetition of HSC/Diploma Examinations, the merit is determined as described below.

All the candidates who have applied for admission against the seats reserved under category-C are considered first for admission against the seats reserved for their respective districts under Category-A. If a candidate who is selected against the district quota but does not get the discipline of his/her choice, his/her seat and discipline of that district may be transferred to the category applied for and he/she is given priority on merit basis in that category.

The admission of student, who remains absent continuously for three weeks from the date of start of classes / date of admission of First Semester of First Year, without obtaining permission from Dean Faculty concerned through the Chairman/Director of concerned Department/Institute shall stand cancelled automatically without issuing any notice thereof.

The admissions for the session is made up to the end of FOURTH week from the date of start of classes. After this period no new admissions will be made. However, any change of discipline on merit is made up to 07 days after the closing date of admission. The seats fallen vacant are not filled-up.

There is a provision for transfer of students admitted in Mehran University with some other Institutions of Pakistan as described below :-

Three candidates, two in Chemical Engineering and one in Civil Engineering having the domicile of Categories A.1 to A.4 are nominated for admission to the University of Engineering & Technology, Lahore, on reciprocal basis. The candidates desiring to be considered for this nomination should give their intent in writing in the option form. The Mehran University authorities will make the final selection for this purpose.

One candidate in Civil Engineering having the domicile of Categories A.1 to A.4 is nominated for admission to the University of Engineering & Technology, Taxila on reciprocal basis.

NOC and Study Leave Order for Candidates Already in Service

The candidates who are already in service at the time of submission of admission form should attach NO OBJECTION CERTIFICATE from their employers for their admission. After selection to the First Year Class, they are required to submit study leave order and relieving order from their employers for study purpose at the University because the Bachelor’s degree program is a regular full time and day program and no student admitted in this University is allowed to engage himself/herself in any employment during his/her studies.

Admission in any Other Institute

Being a full-time program of studies, no student of this University is allowed to enroll in any other full time or part time courses of studies in any other educational institution without prior permission of the authorities of the University. Violation of the above may lead to the cancellation of his/her admission.

The students, after getting admission at the University, will be issued University smart identity cards by ICPC. It is necessary for the students to keep their valid identity cards with them while attending the classes, traveling in the point buses or staying on the campus.

Those students who are eligible for any semester of any year and remained absent from their classes and examinations for any reason, are considered for re-admission in the appropriate semester where they left their studies, with the appropriate batch subject to application of other relevant rules by the Re-admission Committee, provided their absence is not more than two calendar years. However their attendance to determine their eligibility to appear in the semester examination is considered from the date of issue of re-admission letter. Such admissions may be made within four weeks from the date of start of classes of particular session. The application for re-admission shall be submitted through the chairman/chairperson/director of the concerned department/institutes to the Dean of the faculty concerned giving the cogent reasons.

(i)
Admission fee is payable only once in the beginning
(ii)
Candidates once admitted under these schemes shall not be allowed to change the discipline except the seats in the desired disciplines are available.
(iii)
The University follows the National Level Fee Refund Policy at Higher Institutions of Pakistan which is as under:

(iv)
The candidates applying under these schemes will also be considered for admission under Regular Scheme, if they are in merit against their districts.
(v)
The University also follows the Fee Refund Policy for the students admitted against Self-Financing Scheme which is as under: